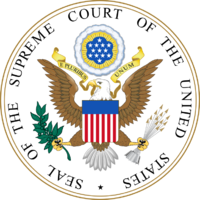 About the United States Supreme Court

The Supreme Court of the United States (SCOTUS) is the highest court in the federal judiciary of the United States. It has ultimate appellate jurisdiction over all U.S. federal court cases and state court cases that involve a point of federal law. The court holds the power of judicial review, the ability to invalidate a statute for violating a provision of the Constitution. It is also able to strike down presidential directives for violating either the Constitution or statutory law. However, it may act only within the context of a case in an area of law over which it has jurisdiction. The court may decide cases having political overtones but has ruled that it does not have the power to determine non-justiciable political questions.