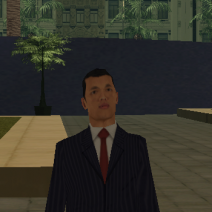 Castiel ‘TJ’ McCabe AKA Eric was born in a safe village of Bone County, on 28 April 1982. His family was not very wealthy but they were a happy family, father works at local Gas Station near the village and mother takes care of the house. They were happy with the new born and alas they named him as “Eric”. Both father & mother always wanted the best for there child, so they already decided to let the child choose the path he wanted, the path which makes him happy when he’s grownup. As the child grew up he had some of his dreams to be fulfilled but it was just a dream after all. Parents died in an accident and left young Eric at the age of 6. His childhood not went very well; the child grew up in streets with thugs and mobsters which corrupted his soul. Eventually, he became a thief and at age when he should’ve gone to school and get education; he had to steal wallets to survive. However in deep down corner there was still a good boy who has many talents but he needed to survive so he’d to do the wrong thing even he’s willing not to. At age 11 he was caught by an Officer, which was very sad to see a child growing in dirt. The cop helped him to move to a school under Law Enforcement Supervision and let him finish his studies, after 12 years Eric became a new man, a gentleman. After completing studies Eric decided to move to the Los Santos. He moved to Los Santos and tried very hard to get a job for a fresh start of his life and career. But it’s very difficult to find a job so but he not wanted to quite so easily and he kept searching for a legal job and alas he found a job at Ocean Docks warehouses, it was a heavy one, but he had no other choice. Working hard for some years, the owner's had trust on Eric. They told him the real purpose of the warehouse; it was a drug safe, all the crates Eric lifted for years were filled with drugs. The warehouse served to a family called "Luciano". After knowing this Eric felt very sad that he was helping some short of criminals. He left the warehouse and begins again to search some job. After some months he was accepted in SAFD and started working as fireman, but the earning was very less in compare to salary he gets when he was working at warehouse. Selfishness killed his good personality from inside and he returned to warehouse. He started working with them again and done few trades of drugs, this requires skills to avoid police also, so Eric was taught to avoid the police, at all means. Sometimes he carried a gun with him for his safety.

Many years were passed and Eric was getting rich plus he’s becoming short off a gangster which attracted the attention of Los Santos Police department also. Now Eric needs to be more careful because of cops searching for him. Eric had this "special" delivery to make, handle heroin to dirty gangsters at Santa Marine Beach. While he was delivering he saw a man surrounded by some Local PD officers, Eric felt to engage on them and wanted to save the man. He distracted Officers by gunshots and quickly grabbed the Unknown stranger in his car and fled away. After rescuing the person and evading PD Eric asked for introduction of the stranger. Stranger introduced him and told he’s caporegime of The Luciano Family. Eric felt destined about the incident and he told the man that he’s working for Luciano’s indirectly at warehouse. The guy invited him for a little chat at HQ of Luciano Family. Eric visited and introduced to the boss and in short time he got accepted in Family. As Eric is now officially the gangster he had to avoid PD more. In few years he earned the money and fame he needed but he still felt empty and lonely from inside. It’s feeling that he’s not doing what he wanted and which makes him happy. Being in Luciano was not very easy because mostly they were hated by other gangsters and always being chased by cops. In few months Eric figured out that being in Luciano is very dangerous, being wealthy and rich is good but he could’ve finish to graveyard if he continued his career in family. Eric and family went to a meeting with another mafia who were going to negotiate for good relation ship between each other, but the real intension was to kill the Godfather of the Family. The meeting ended up in war and in a massive shootout many peoples were died. Standing alone Eric saw Godfather is being chased by Police, so he decided to distract them until he can escape. A sacrifice must’ve made. Eric was arrested and brought to Local PD for further process. There he met the Officer again that changed his life during his childhood. Officer eyes were filled with disappointment and pity. Eric felt very bad at that day, alas he got jailed for several years. In jail Eric decided he will leave family when he’s set out and do something meaningful. After the punishment was over Eric was released from jail. In this era of time everything was changed inside of him and he decided to apply and join SAPD. He successfully passed the exams and joined the force. His career at SAPD was very bright and he’s willing to do it forever. Finally he was doing which makes him happy and alas he was at peace.

"Respect the server and its players."
Retrieved from ‘http://wiki.argonathrpg.eu/index.php?title=User:Eagle&oldid=8288’