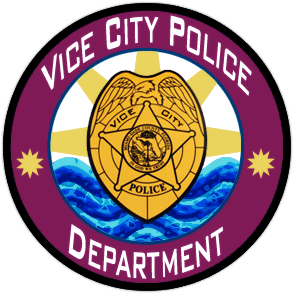 About the Vice City Police Department

The VCPD has its main objective as law enforcing. The members of VCPD patrol the streets like any other police officer, enforcing the laws, granting the citizens safety and fighting to take the crime off the streets, as well as improving police work and the cooperation between the divisions of all the servers where they have their divisions estabilished. They also work with the law citizens who aren't members of the ARPD but help in crime fighting, by improving their work and their co-operation with the official divisions and training those of the law citizens who want to become trained and professional law enforcers (ARPD members). The VCPD handles crimes within the Vice City Jurisdiction. They may also pass murder and narcotic crimes to the Federal Bureau of Investigation VC:MP Division.

The VCPD works with its main division (where all Cadets and low-ranked/newly promoted Officers are), the Special Weapons And Tactics (SWAT) division, which is formed by professional officers who show really good skills and are considered the best in the force. The VCPD also cooperates with the Federal Bureau of Investigation (FBI).

Some of the former divisions of the VCPD were:

Unit Description: Assisting in suitations where SWAT was not required. For example a shootout between Police and a Suspect. If the suspect was known to have an extensive criminal history the SRU would be dispatched to intervene.

Unit Description: Was the "FBI" back when the decision was made to make the FBI intergated into the VCPD. Thus the VCID was created. However when the FBI was brought back out of the VCPD due to the efforts of Director Johann "Jonathan" Mercer, the division was scraped and thus becoming the FBI again.

Every interested law-abiding citizen is welcome to try his/her own way into ARPD. Those who want to join should post an application in the Vice City Police Department Applications section, following the Application Instructions. If you get accepted, you'll be guided into the VCPD Academy process and get trained, tested, and promoted to Officer, if you pass the exams.

Many advantages: You'll become a professional and recognized member of the law enforcement team, will have support from Command Staff and from other officers if needed, and you will have a career. Doing your job and being a good officer will get you be promoted. You will have better police work opportunities once joining VCPD, as well.