Alderney is a small state located to the west of Liberty City. Although the two states are completely independent from one another, Alderney State is known by many as being part of Liberty City's metropolitan area. The state is only a little bit smaller than the neighboring Algonquin borough of Liberty City. 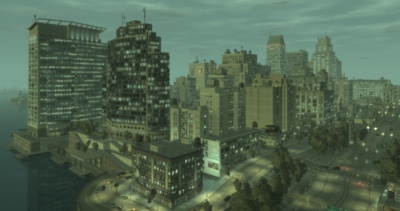 Alderney is a small state located to the west of, and independent from Liberty City. The state is largely dominated by Alderney City, and is concentrated towards the middle of the island with Sopranos-esque upmarket suburbs located to the north and the Acter Industrial Park (based on the Port Johnson industrial sector at Constable Hook) on the southern end. The abandoned "Sprunk" brewery is located here and the city is filled with strip-malls and condominiums. The state is infamous for its prison, Alderney State Correctional Facility (based on Northern State Prison in Newark) located to the east of the Acter Industrial Park and an abandoned casino to the north (an exact copy of an abandoned casino in Asbury Park) in Westdyke. Alderney City is connected to Algonquin via the Hickey Bridge and Booth Tunnel.

Districts Include Acter, Berchem, Leftwood, Tudor, Port Tudor, Westdyke and Normandy. It is implied throughout the game that Liberty City citizens do not like Alderney, or anyone from it. One of the Helitours pilots says, "There's the West River. Every day people from Liberty City are glad to know this separates them from Alderney." In the game guidebook Alderney is depicted as "Liberty City's Ugly Sister". Despite the mutual animosity between the two areas, Liberty City shares a number of its services with Alderney, including taxis and emergency services, for example, the FDLC (Liberty City Fire Department) operates two fire stations in Alderney, and the Alderney police officers identify them selves as State Troopers and wear State Police patches on their unique uniforms, but drive LCPD-marked cars). Many members of The Lost can be found on the streets of Acter, Alderney riding their motorcycles or standing around on street corners. In The Lost and Damned, the Lost have a clubhouse in Acter, Alderney.