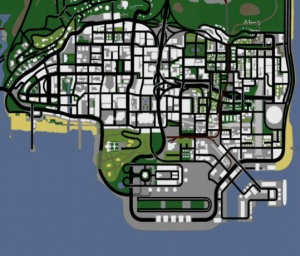 Los Santos is a city located in San Andreas. Los Santos is the capital of the State of San Andreas. Los Santos translates to 'The Saints'. Los Santos is a huge, sprawling co-mingling of cultures and perspectives, full of two-bit hoodlums and small-time actors. The population of over the city is divided into 32 districts, which are home to movie and television studios, multi-million dollar estates, crack-ridden ghettos, and a busy international airport. Numerous roads and a central rail line connect Los Santos to San Fierro and Las Venturas. The most infamous street in the city is Grove Street, located in Ganton, south-east of Downtown Los Santos, and just minutes south of East Los Santos, which contains a predominantly Hispanic population.

There is a motocross track, several basketball courts, and an observatory to satisfy stargazers. Occasionally, independent drug dealers are seen carrying huge wads of cash from recent transactions. Graffiti is commonplace and gambling venues like the racetrack are frequented by many of the city's denizens. The suburbs nestled in the north hills are home to wealthy businessmen. The occasional shack or trailer park can also be spotted within this highly affluent district, testaments to the period prior to the gentrification of northern Los Santos.

The western part of Los Santos is considered the "wealthy" side of town, containing Vinewood, Rodeo and Mulholland, known around the world as the offices, studios, shopping destinations and homes of the rich and famous. The middle section of the city, contains major corporate headquarters in Downtown, civic-minded buildings around Pershing Square, and their airport.

The eastern part of the city, known as "poor" side, is made up primarily of lower-class suburbs that are all subject to violent crime, marked by the Ballas-Grove Street War and the area where the Los Santos Riots started, which eventually spread to the entire Los Santos area. The city is torn apart over the issue of gang warfare. The Grove Street Families and Ballas constantly spar over total dominance in Ganton, Idlewood, Jefferson, Willowfield, and even East Los Santos.