Broker is one of the five boroughs of Liberty City. It contains 12 out of the city's 65 neighborhoods. It is situated to the south of the borough of Dukes and connected to Algonquin by the Broker and Algonquin bridges. Broker and Dukes are the only boroughs in the metropolitan area that share an island. Waters separate all other boroughs. 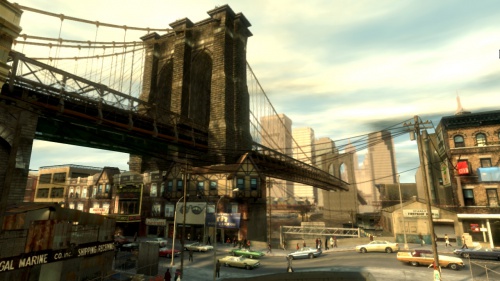 Broker is located south of the borough of Dukes, on the southern half of the island located in the eastern part of the city. Broker is primarily an industrial portion of the city, made up of factories, warehouses and brick townhouses, many of which are dilapidated. The borough's population consists largely of ethnic gangs, hipsters, and industrial workers.

Broker has a very large diversity in the characters of various districts, as like real-life Brooklyn. The western districts (East Hook, BOABO) are gritty, run down and industrial, however in some cases gentrification is common. In other districts, like Outlook, Rotterdam Hill and South Slopes, a diverse, upper and lower middle-class population of yuppies, immigrants, businesspeople, working-class and hipsters resides, There are also districts with their own individual, ethnic minority identities, these include: Hove Beach, Firefly Projects, Schottler & Beechwood City. The borough also offers areas with important uses, such as a business district and urban center: Downtown Broker, Firefly Island and an affluent, gated, residential area for some of Liberty City's wealthiest: Beachgate.

According to the TV documentary on the History of Liberty City, Broker is named after Sir William Broker III, the (fictional) illegitimate son of the King of Great Britain. Most streets in Broker are named after famous cowboys, such as Hickcock (sic) Street and Earp Street, while most avenues are named after Native American tribes of the Northeast, such as Mohegan Avenue, Seneca Avenue, and Mohawk Avenue.