Dukes is a borough of Liberty City. Whilst it only contains eight out of the city's sixty five neighborhoods, the Dukes neighborhoods themselves are large, thus the borough is large, being equal in size, if not, slightly larger than its neighboring borough Broker. 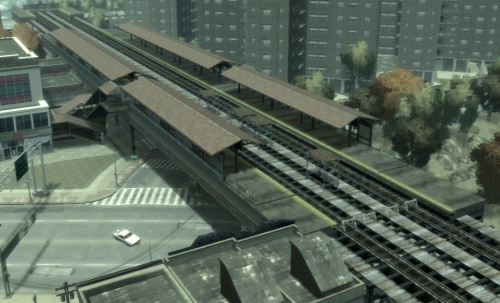 Dukes consists of 8, large, heavily-populated neighborhoods and has the second-highest population behind Algonquin.

The character of Dukes varies considerably across its neighborhoods. It has the most green space out of all the boroughs in Liberty City which is particularly concentrated around the districts in the north of the borough such as Meadows Park, and western parts of Francis International Airport.

The income of Dukes itself overall could be described as middle class, as it also could be considered the most suburban out of all four boroughs. The main urbanized district of the borough is East Island City which is centered around the Dukes Boulevard thoroughfare. It contains both modern business land use. It consists of a Bank of Liberty chain, the National Union of Contemporary Arts and the LC24 Tower in addition to declining industrial areas in the neighborhood's southern reaches, where it merges with Broker. Charge Island is Dukes' other industrial centered local. Commercial shopping areas are centred around Camden Avenue in Cerveza Heights, where the majority of shopping outlets are independent ethnic businesses, as well as Saratoga Avenue in Willis where there is a Shopping Mall as well as the presence of chain business outlets. Cerveza Heights can be considered the neighborhood of central importance in Dukes, with the presence of the borough's medical and policing services on Livingston Avenue as well as the housing of Huntington Street LTA, an important Subway station providing a crossover interchange between the two loops of the 3/8 Broker Line.

Some parts of Dukes could be considered leafy, quaint and expensive suburban locales. These are mainly focused around Willis, Meadow Hills, Meadows Park. Dukes' only housing projects are the Steinway Projects which are located along Yorktown Avenue in Steinway, a working-class neighborhood.

Francis International Airport is Dukes' and Liberty City's largest district, and obviously serves as the center for aviation in Liberty City.

The borough shows evidence of much multiculturalism. The communities often noted for a strong ethnic identity in Dukes include: Irish/German Steinway, Italian/Hispanic/Chinese Cerveza Heights and Jamaican/Caribbean Willis.

According to the TV documentary on the history of Liberty City, Dukes is a shortened version of "dookie" (slang term for feces) because most of the residents there "smelled like shit." Most avenues in Dukes are named after famous American military battles, such as Bunker Hill Avenue, Inchon Avenue and San Jacinto Avenue, though Battle of San Jacinto was fought by the Texans before America acquired Texas in the early 19th century.