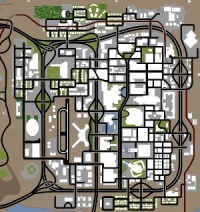 Las Venturas is a the second largest city in San Andreas, and is located in a desert region and enjoys legalised gambling, sporting casinos such as The Camel's Toe and Caligula's Palace. The city is also notable for its freeway system. The Julius Thruway is a freeway that circles the whole city. Freeways from both Los Santos and San Fierro intersect with it. Another freeway is the Harry Gold Parkway, which runs through the middle of the city and intersects twice with the Julius Thruway and then leads to Los Santos (though it is not called the Harry Gold Parkway once it leaves the city).

Everything you can buy in Las Venturas, except for the Pay 'N' Spray service, is more expensive than in Los Santos or San Fierro. The name Las Venturas translates to "The Fortunes". Las Venturas is home to the famous baseball team, the Las Venturas Bandits, and Greenglass College. The city is also home to several mafia families.

The Harry Gold Parkway is another highway, splitting the whole city into a western half and an eastern half. It services mainly the airport, some few casinos and the central areas. It also leads to a highway leading to the south, crossing The Mako Span to reach the Montgomery Intersection and becomes the major freeway through Downtown Los Santos, and its most southern point is Los Santos International Airport.

The Brown Streak Railroad services Las Venturas, with its two stations (Linden Station and Yellow Bell Station) being located in the northern and eastern part of the city. The Sobell Rail Yards are also in the east of the city, though it is not considered a stop for Brown Streak and Freight trains.

Las Venturas Airport is an airport on the south-central part of the city, with two runways and a number of planes. It is serviced by Juank Air, and tickets to Los Santos and San Fierro may be purchased.