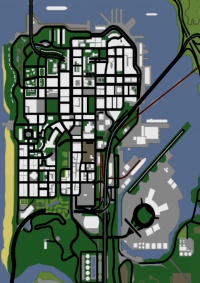 San Fierro is one of the cities of the State of San Andreas.

San Fierro is the smallest metropolitan area in San Andreas, but the most urbanized, and is situated on a peninsula on the western part of the state. South of the city lies the massive Mount Chiliad and the small town of Angel Pine in Whetstone. To the north of the city, acros the Gant Bridge, lies the town of Bayside, and northeast of the city lies the county of Tierra Robada. San Fierro is a moderately sized city with the beautiful San Fierro Bay to the north and The Panopticon to the east. San Fierro is connected to Los Santos and Las Venturas by road, rail and air.

There is a sizeable country club complete with a golf course within San Fierro. In addition to this, San Fierro has a district marked by rainbow signs, home to a sizeable gay population. San Fierro is also home to the football team, the San Fierro 69ers.

The city bears visible scars of an earthquake, The most obvious sign of the intense damage is the crumbled section of freeway lying to the immediate west of Garver Bridge's San Fierro approach. The freeway section does not seem to have any visible connection to the existing freeway, however. The city's infrastructure and buildings are not visibly damaged from the earthquake, the only such damage being in the Doherty area.

San Fierro commonly experiences rainstorms. These, combined with the frequent late-night and early-morning fog, can make driving and flying difficult because of reduced visibility. To further complicate the city's weather patterns, the Tierra Robada sandstorms occasionally blow into the northeastern parts of San Fierro, making flying near the Garver Bridge and Downtown skyline extremely treacherous.

Although cars are prominent, there are cable cars (trams) that circle San Fierro. The Brown Streak Railroad stops at Doherty's Cranberry Station across from Doherty Garage. The Easter Bay Airport is located at the southeast of the city, off Exit 3, the second to last exit, from the Garver Bridge Approach.