The eastern island of Vice City, also referred to as "Vice City Beach" on the roadsigns, is depicted as the more affluent and tourist-oriented side of the city, which is mostly dominated by upper and middle-wealth businesses, as well as residential condominiums, apartments and construction sites. The eastern island is also known for a wide beach, dubbed "Washington Beach", on its east side, which makes almost half of the island's landmass. The island also has a waterway on its west side, including neighboring Leaf Links.

Ocean Beach is a shopping district on the eastern island of Vice City and has the majority of Vice City's beach. Ocean Drive, a long road on the east side of Ocean Beach, is lined with hotels and is located right next to the beach.

Ocean Beach is an upper-class tourist district consisting of a few skyscrapers and many low rises, directly based on Ocean Drive in South Beach and located in the southeastern most of Vice City. The area is primarily occupied by seaside and beach side apartments, hotels and upper-class businesses.

There is lighthouse located at the southeastern most point. Inland towards the west, Ocean Beach contains additional commercial and residential buildings. The district boasts a marina named Ocean Bay Marina. A hospital is also situated on the northwest end of Ocean Beach, named Ocean View Hospital, it is likely named for its locations affront the city bay.

Washington Beach is a small district in Vice City. The Washington Mall, a small open-air mall, is located in the area. The district is only a few blocks long.

It is situated between Ocean Beach from the south and Vice Point from the north, encompassing the northern end of the Art Deco Historic District-like beachfront district, its inland area, and the southern half of a smaller island to the west containing two construction sites and several additional apartments and housing.

Washington Beach also contains a police station located at the northern edge of the district.Washington Beach is also connected to Starfish Island via a short bridge between the Washington Beach island; the roadway connecting the two districts stretches across the islands and ends at the edge of Little Havana. 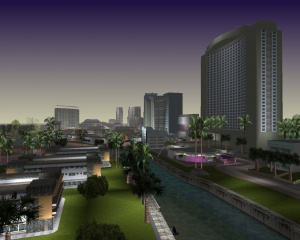 Vice Point is a middle class and residential area of Vice Beach, covering the remaining areas of the island at the north, and consisting of larger apartment buildings and hotels aligned along the shore as well as medium sized homes and smaller apartment complexes inland. The part of Vice Beach that is located in the area includes a dirt bike track.

The North Point Mall is a large mall located in the north end of Vice Point. The mall, among others, contains a few eateries, as well as two weapons stores and a clothing pickup. In the GTA Vice City Stories rendition, the layout is essentially the same, though some of the businesses that are in 1986 are not there in 1984. There is only one weapons store.

The Malibu Club is situated on southern Vice Point. A police department is also located further north, as is another hospital, along with the El Swanko Casa.