Bone County is the desert region spanning the northern and northeastern portions of San Andreas. This arid region is the largest continuous land mass in the entire state, and suffers from frequent sandstorms. The general sentiment is one of rugged isolationism, juxtaposed against the one bustling, sparkling oasis in this vast desert, Las Venturas. Bone County is home to large public works projects, such as Sherman Dam and The Big Ear; tourist traps like Regular Tom; large rock formations like El Castillo del Diablo and Arco del Oeste; ghost towns such as Las Brujas; a quarry; and a top-secret government research facility, Area 69.

The radio station K Rose broadcasts from somewhere in this desert, as does the Area 53 radio show, featured on WCTR. On the radio show Gardening with Maurice, a woman from Bone County inquired as to why she can't grow flowers, to which Maurice replied, "Get out of the desert, you moron." Bone County is also home to three myths, namely the mass grave, a serial killer, and UFOs.

There are four main towns in the area, Fort Carson, Las Brujas, Las Payasadas and #Valle Occultado, as well as an unnamed town on the border of the county with Las Venturas.

Fort Carson is the largest town in Bone County in the State of San Andreas. It is the county seat of Bone County, as indicated by the small red building in the main street, having been significantly undeveloped as of 1992. North of the town is Lil' Probe'Inn, as well as Area 69, The Big Ear, Green Palms and Regular Tom, while to the south is the Martin Bridge and Red County. West of Fort Carson is Tierra Robada, while to the east is Hunter Quarry. There is an Ammu-Nation and Cluckin' Bell just outside of town. Fort Carson also boasts five Motels. A miniature version of the Vinewood sign is perched upon a hill on the eastern side of the town, though the name is changed accordingly.

Las Brujas is a tiny ghost town nestled between the Sherman Dam, Arco del Oeste and El Castillo del Diablo in Bone County, San Andreas. Also near the area are Area 69, Regular Tom and Verdant Meadows. The name Las Brujas translates directly from Spanish as The Witches or The Sorceresses. The town is depicted as a two-street settlement populated by predominantly wooden buildings, appearing similar to a frontier town in the Wild West. In addition to the standard fare of (now empty) homes and businesses, the town also features a windmill and a modest wooden chapel, complete with a fenced cemetery containing tombstones in the rear. At the graveyard there is a common myth which involves a single woman seen standing in the middle of a foggy night. There is no evidence which supports whether this is real. There are no functional facilities servicing this area and none of the buildings are occupied.

Las Payasadas is an unincorporated community located in northern Bone County, San Andreas. Roadside signage of the town indicates an estimated population of 211 in 1992. It is situated only minutes northwest of Verdant Meadows (overlooked by the town), and contains a prominent feature of the surrounding landscape, a large plaster chicken with a constantly bobbing head. When entering the town from west, a sign is visible saying "Las Payasadas, home of "The Big Pecker", The World's Largest Cock". The name Las Payasadas translates roughly from Spanish to horseplay, clowning around, or antics, a possible reference to the lack of seriousness afforded to this town owing to its giant chicken. Other than the chicken, the town does not possess any other points of interest. 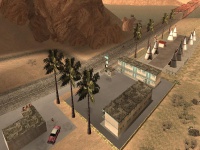 Valle Ocultado is the smallest functioning municipality in San Andreas. Its name is bad Spanish for Hidden Valley. It is located in the northwestern tip of Bone County, at the foot of the bridge leading into Tierra Robada to the west, and just north of Arco del Oeste. This tiny community consists of two motels, an establishment with a sign reading "GAS" and a boat station. Nearby areas include Sherman Dam, Sherman Reservoir, Las Payasadas and Arco del Oeste.

There is a very tiny town in Bone County that neighbors the outskirts of western Las Venturas. It has two highways: one connects to the Pilson Intersection and the other, into Julius Thruway North. The unnamed area has a population of 22, and is the least populated community in the game. There is also a portion of the Brown Streak Railroad that cuts right through it. Places of interest include the Big Spread Ranch strip club, Ammu-Nation, a hotdog stand, trailer park, car dealership and truck stop.