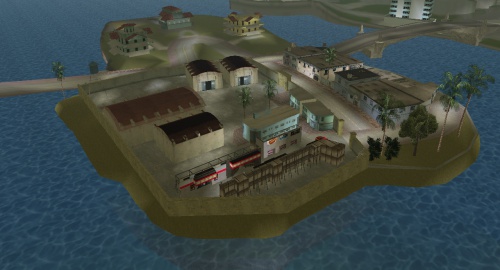 Prawn Island is a small island in northern Vice City, between Downtown and Vice Point. The island is divided roughly in half, with the office/industrial buildings on the south side and several lavish mansions on the north. Prawn Island consists of 3 mansions. They are north of the main highway that runs horizontally through the island and are connected by a small drive circling a fountain. There are also a few businesses located on the east side of the island and a film studio called Interglobal Studios on the south-west part. The homes appear to have been abandoned.

Starfish Island is a large oval-shaped island at the center of Vice City. Located between southern Vice Beach and Vice City Mainland, Starfish Island is a wealthy district containing lavish mansions and estates with swimming pools, large garages and parked speed boats. There are also two specially shaped swimming pools in the shape of a Rockstar logo and a bikini-clad woman on the island in the yards of two mansions. The area also has its own armed security who patrol the island. There are a total of 11 mansions located on Starfish.

Leaf Links is a collection of three islands located just west of Vice Point, encompassing the Leaf Links country club, which sprawls over many islands and crosses a major road. Located west of Vice Beach, it is surrounded by water and condominiums, and is a major attraction for the wealthy. Golfers are constantly seen in the area. Leaf Links is currently a private part of the city.